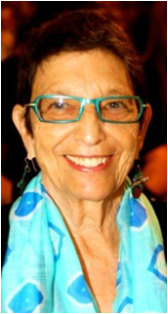 Kate Ullman attended Professional Children's School, in NYC from the age of 5 till she was 12, while pursuing a career as a child model as well as acting. Many years later, after college and moving to the West Coast, the opportunity to be introduced to improv presented itself by attending the Magic Theatre in Omaha, Nebraska.  Kate was delighted to reconnect with performing. The  Magic Theatre was an experimental theatre and highly creative space under the direction of Jo Ann Schmidman, and Megan Terry serving as the playwright in residence.
After several months in Omaha,  Kate returned to the Bay Area where she opened an antique business which became her career until she moved to the desert in 2000, where she was drawn to taking improv classes locally with Jeanette Knight.  Deciding to  follow her passion for improv she took classes at Second City in Los Angeles.  Presently she is teaching improv workshops and facilitating at retreats.   “Be in the moment, let go of expectations, in a fun, safe environment.”